💡
"Education is the most powerful weapon one can use to change the world." - Nelson Mandela

While we dive deep into the world of banking, it's important to remain empathetic and not polarized on banks as evil entities. The system and entities we have today have provided us with many blessings and curses. The intent of this article is to educate on a subject not widely known and to seed the knowledge to help bring about productive dialogue to drive principle-led change and find common ground toward progress.

The education system in America is failing our country. Youth are systematically unequipped to innovate, understand what money is, how to obtain it, how to grow past your life traumas, manage mental health, and more importantly spark hope to march America forward. I say this from personal sentiment in what I see as a young professional with family, friends, colleagues, and peers.

As all things, there is cause and effect. The effects of today were caused by the decisions and systems of yesterday. If we're ever going to innovate and overcome our problems, it is mission critical we educate ourselves on the mechanics of money, power, and economics. While this history goes deep and to the beginning of 'known' human civilization, we will focus more on recent history and the conception of Keynesian economics and fractional-reserve banking and how this has influenced the banking system of today.

The origins of modern-day banking by the Medici family in Florence, Italy began with the noble intention of expanding commerce, achieving higher-levels of organization and productivity, and bringing better quality of life to the country. Fiduciary nobility in finance must be restored. However, credit economies go as far back as Babylon. Banking is ancient.

As anyone beginning to educate themselves on money, or the technical term, numismatic history - it's important to note that money and power are synonymous. The first rule of money, in my eyes, it was never about the money. While the statement is fairly paradoxical, think to yourselves the strategic capabilities that money provides. You can build infrastructure, finance militias and war, transmit value to each other in commerce, and many more applications. The concept of money has allowed us to collaborate, organize and evolve human capabilities to the quality of life and advanced technologies we have today.

In the modern day age, the creation and exportation of capital tied to petroleum has allowed the American empire to flourish over recent history. While we won't be digging into the petro-dollar system, the main thing to understand is that money creation is the ultimate capability for power and influence.

The core of all first world economies is the monetary creation mechanism.

Three schools of thoughts on how Banks actually work:

When Banks issues a loan, where does the money come from? To understand this we have to dive deep into the mechanics of accounting and the information systems that support it. Say you seek a 100k USD loan, what actually happens under the hood? Where does the bank get the money from? Is it from deposits as financial intermediary theory states? Is it from excess reserves as the fractional-reserve theory states? Or is it just created out of nothing in the credit-creation theory?

Per research by economist Richard Werner, the second you sign the loan contract, that is considered a promissory note. In essence, you've issued a security to the bank that they buy and account for it as an asset on their balance sheet (like an IOU). Bankers do not transfer money, empirically - money does not come from any other account inside or outside the bank. Deposits are not booked as an accounts payable liability, they're booked as a liability of a different category as a customer's claim on the bank. On the legal side, there is no magic. The banking licenses give them the right to accept deposits and then invent new liabilities on themselves, thus creating new money.

All the meanwhile, very few are aware of this Babylonian magick.

So why is it this knowledge is obfuscated and hidden from those who complete the education system?

The Federal Reserve has also discontinued weekly reporting of M1 money supply because per Chairman Jerome Powell, it is no longer an appropriate tool for Central Banks to monitor money supply. What the f**k? Bottom line, the education system has neglected enlightening the populous on the monetary mechanism that creates and destroys wealth - the means of power and influence. Exporting capital is the means in which America preserves global financial hegemony.

Remember we're talking about money creators... their decisions on who gets the money and what they use the money for changes the economic landscape and destroys the institutional and academic logic of economic models. This is the mechanism that created money that has caused asset bubbles throughout history. This is always unsustainable, this system does not control space and time fundamentally. This system works when money created is focused on business investment, rather than highly-speculative or negligent financial activities.

The golden rule of banking is that credit-creation needs to implement new technologies, increase quality of life, and promote productivity.

While we can never control the action of others, we can arm ourselves with the greatest power of them all - knowledge. Economies don't grow... it is just accounting fiction. Physicist will tell you energy is transferred it is not created, per the laws of thermodynamics. Creating money does not equal creating energy. We must continue to converge our scientific thinking with the dark arts of finance. As we discover this balance, we can progress towards common goals. We have to solve income inequality, restore economic mobility, educate systematically the youth joining the labor market for the information era, and evolve our skillsets. Do your part and spread the fruits to sow positive change. The worst thing we can do is place trust in things we cannot verify through understanding.

If you’ve actually read and gotten this far, learn more about us below:

To collaborate, learn from each other, pioneer dialogue, and discuss with us further on these ideas. Join our Discord community. Make sure to introduce yourself or you will not be permitted.

If you’re interested in investing with us, reach out to [email protected]. 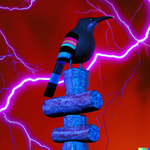